Can design raise awareness about climate change?
That’s a big question, but what is for sure is that designers around the world are taking inspiration from climate change for their work.

The results are interior design pieces that sit in between art and design. Besides the aesthetics, they tell the story of our changing environment and put it right in front of our eyes.

Someone could argue these pieces cannot do much to raise awareness about climate change, but I tend to disagree.

One of the reasons why some people don’t care about climate change or don't think about it, is because its most “spectacular” consequences are (still) far from their daily life.
Which even makes sense in a way!

In this situation, climate-change inspired designs can help because – by displaying the consequences of climate change – they bring them closer to the viewer.
Also, these pieces have all been exposed during the most influential design fairs. A sure way to reach a big public and hopefully stimulate further reflection!

Ile Maurice and Ile Rodrigues are two coffee tables representing the effects of raising ocean levels in the Mauritian archipelago.
Their legs – made of lava stone and coral stone – represent the highest mountains of the archipelago, that would probably be the only land to remain above sea level after the rise of oceans. And the tempered glass tops are meant to recall the shapes of the two islands.
These (honestly gorgeous) tables have been exposed during the latest London Design Fair as part of an exhibition showing sustainable and circular design projects.

Although plastic pollution is not an effect of climate change, it's still a relevant issue for the environment and design is addressing it more and more. For instance, Brodie Neill is renowned for his circular design projects and his ability to talk about climate change through design.
Back in 2016, he’s been using fragments of plastic waste found in the ocean to create Gyro, a mosaic-effect table.

And during Milan Design Week 2019, he has participated to the Guiltless Plastic initiative with his Flotsam ocean plastic bench and Capsule, an hourglass filled with plastic instead of sand.

The work of Fernando Mastrangelo is often inspired by nature in one way or another. And sometimes it is particularly inspired by the effects of climate change. One example is his Drift collection, that, recalling ice, is a reminder of the threats that are currently affecting glaciers.

The rugs of his Reverence collection address the same topic by depicting breaking ice slabs (Break), melting ice (Melt), and the staining effects of pollution on glaciers (Swell).

A reminder of climate change to stimulate action

If these objects are meant to represent negative environmental issues, they still look gorgeous. Which – in my opinion – is essential to make them a viable option to use in interiors (because aesthetics is still important to create a pleasant interior design!)

Essentially, these pieces cause a double reaction in me.
The first is wonder, for how beautiful they look. But then comes a tale of bitterness, when I think at the meaning they carry. I think that having one of these at home could act as a reminder and call the attention on the fact that each everyday action can make a difference.

What to say to conclude…
The environmental outlook is effectively pretty grey, but we can all do something. Starting with everyday life, we can avoid single use items as much as possible and be careful not to waste water and other natural resources...just to name a couple of examples. 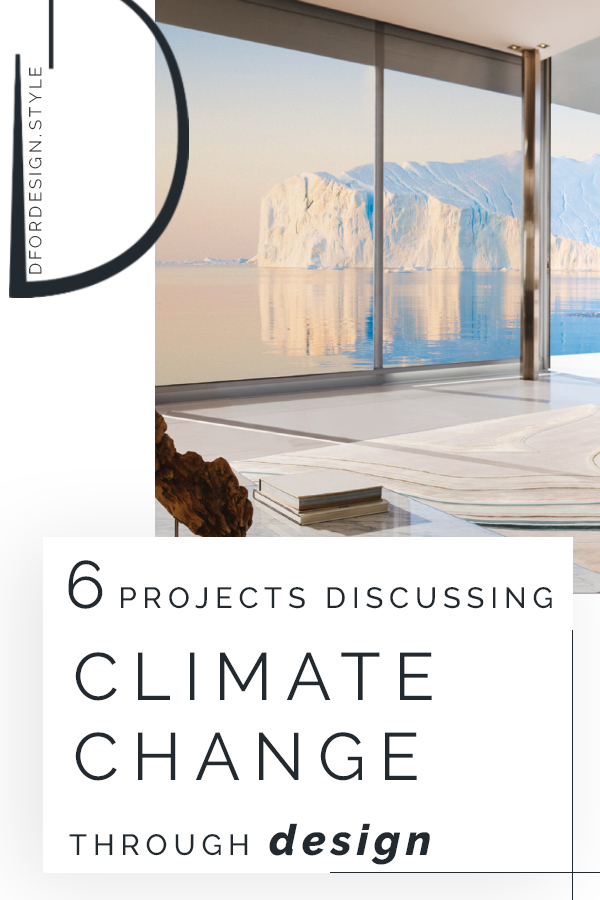 Don't be shy, let me know what you think!

Join 100+ biophilic and sustainable design enthusiasts on the monthly newsletter.
I'll never share your email with third parties and you can unsubscribe at any time.